‘ Japan’ has always been synonymous with innovation and technology. With inventions like the pocket calculator, bullet train, car navigation, android robots, and what not, Japan has earned itself great recognition as an inventor. However, the country has been battling several problems over time, including its stagnant economy and ageing infrastructure. Japan is the world’s largest infrastructure owner with over 2,000 trillion yen in infrastructure facilities and is by far the number one country among OECD countries in terms of the number of facilities as a percentage of GDP. Hence, improving the productivity of infrastructure maintenance and management in response to the ageing of infrastructure facilities remains a massive challenge for the country’s authorities.

Considering the kind of effort and time required to carry out the maintenance and inspection of such a massive infrastructure all across the country, Takumi Shibata, a professional with prior experience in the industry, founded Japan Infra Waymark (JIW). With prior knowledge and experience of operating the drone-based inspection service for NTT West, his previous employer, Shibata, made his way into the industry to address the growing need for infrastructure maintenance.

At the time, NTT West was finding it difficult to maintain the ageing infrastructure as a fixed-line phone service provider. With the consistent decline in the country’s population, this crisis was only going to snowball into a bigger challenge. Shibata foresaw that problems had become apparent at NTT West, the largest infrastructure operator in Japan with a sales jurisdiction covering 30 prefectures, meant that the same problems would occur in the future for electricity, gas, water, railroads, highways, national roads, and bridges. Shibata, hence, founded JIW as the frontrunner in creating a new drone infrastructure inspection market in Japan.

JIW is the first organization in Japan to specialize in infrastructure inspection, which has more than 90 per cent share of the Japanese market for drone inspections of bridges


JIW started developing a non-GPS drone in 2017, even before the company was established. At the time, the company held a competition with more than ten domestic and foreign companies to shortlist a drone developer and eventually partnered with Skydio, selling drones with Visual SLAM for extreme sports filming.After that, the two companies worked together to complete the inspection drone, Skydio S2, for Japanese infrastructure Inspection. Rather than using the GPS for two-dimensional positioning, the drone recognizes its position using a technology called Visual SLAM, which processes the images from the seven upper and lower cameras on the aircraft to recognize the surrounding structures.“Skydio’s CEO and COO also visited Japan to conduct a trial of the inspection of nearly 100 bridgeanchored pipelines in Japan. In a pipe inspection trial conducted by Skydio’s CEO and COO in Japan, the cost was reduced by 75 percent and pilot training time was reduced by 92 percent as the drone autonomously avoided obstacles,” adds Shibata, JIW’s president and representative director.

JIW is the first organization in Japan to specialize in infrastructure inspection, which has more than 90 per cent share of the Japanese market for drone inspections of bridges. The company adopts standardized practices to conduct inspections using drones to ensure compliance and safety while appropriately producing high-quality deliverables. The team at JIW also employs a workflow system known as Waymark Portal to ensure there are no variations in the process followed by the professionals.

Using these systems and a streamlined approach to inspect infrastructure facilities across Japan, JIW has come a long way with its cost-effective and efficient drone inspection service. “We have inspected 70 times more bridges in 2021 than in 2019. We would like to maintain this growth trend and expand our sales to 30 billion yen by 2025,” remarks Shibata. In the near future, JIW seeks to expand its inspection services to China, South Korea, Thailand, Indonesia, and other Asian countries, where it has provided ODA(Official Development Assistance) and other support during construction. All of these efforts of JIW are aimed at its primary objective of improving the efficiency of maintenance management not only in Japan but also across the rest of the world and contributing to more countries and people to create a safer world. 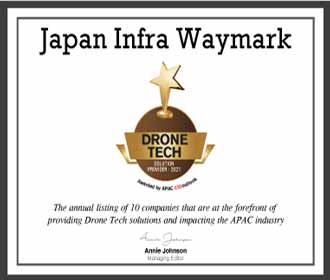