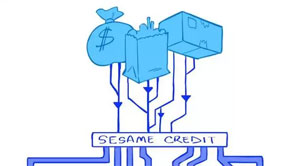 The Internet is great fun. It allows us to remain anonymous and say/do whatever a person wants but here trust and reputation is not usually first priority. But in China, everything is analyzed in a way that it contributes to the reputation of the natives.

This being a practice the western world is known to everyone while the Chinese internet practices are still comparatively lesser known to the world. Both the sources of the internet have different features and market base. One such feature is the Sesame Credit scoring system which is radically changing how citizens in this country are accessing the internet.

The Sesame Credit scoring system has the ability to calculate credit score of online shoppers through examining their shopping habits. For instance, a customer spending money on buying diapers will be considered more responsible than one paying for a movie and will have more credit score. As such, the Sesame credit is becoming the go-to Chinese credit engine rating engine that incorporates social scoring. The system is significantly impacting the credit scoring of Chinese. However, the system also has concerns related to the privacy and transparency of information.

Albeit Sesame Credit resolves many of the problems we face in the ‘Western internet,’ it also has some disadvantages. The state controls the system and hence they can easily punish any citizens by reducing their score and can prevent them from processing their loan or even stop them traveling by train or an airplane as all kinds of services will be overlapped with the social credit system. So, though Sesame Credit is improving citizen’s reputation, it also gives a comprehensive control of the citizens to the government.

Therefore, the Chinese internet is not a solution to the western internet but a problem to the privacy of people. However, a blend of both can bring fruitful results and benefit everyone. With such a system, we can make the internet more trustworthy and obliterate the criminal jobs of anonymous people through global online collaboration.